The Heart of the Rockies Regional Medical Center board heard preliminary reports on the final 2020 budget figures (pending audit) on Tuesday, Jan. 26.

The board also heard less-than-encouraging reports on an ailing but vital piece of the medical center’s infrastructure; a leaky main boiler.

Lesley Fagerberg, Vice President of Fiscal Services said while the 2020 budget was being closed on an interim basis, it will have to await final adjustments and then a fiscal audit.

2020 Budget Shortfall Due to COVID

For 2020, preliminary figures show gross patient patient revenue for the year experienced a hefty $8 million shortfall, related to the curtailing of elective procedures during the COVID-19 pandemic.

“Even though we recovered rather well after we reopened, we still could not completely offset what we lost during the early days of the COVID pandemic,” Fagerberg said.

Net patient revenues, according to the preliminary figures, were just over $80,204,000 or about 4.5 percent under the budget estimate.

Other revenue saw a spike of $5.4 million versus the budgeted estimate of $3.9 million, she noted, due to a great extent to Department of Local Affairs (DOLA) grant funding for the clinic expansions in Buena Vista and Westcliffe.

Expenses for the year came in around $300,00 over budget. Not too bad, Fagerberg said, considering the negative revenue impact, and the additional expenses associated with maintaining staff with no layoffs.

“…We kept our valuable employees on board to help us with the response, even though there was less volume and patient services for them to provide – we held things in check pretty well,” she added.

Supplies, influenced by pandemic demands were over budget, as well as repairs and maintenance.

“We know we’ve had a bit of a tough year with our facilities this year, both on the capital side and on the repair side,” Fagerberg stated. Contract expenses were also over estimates for the year.

Income from operations was pegged at about $2.5 million short of budget, Fagerberg said, and non-operating income was down as well.

Cash on hand, Fagerberg reported was more than adequate, noting that payback of $8 million in advance Medicare payment early in this year would “knock it down a bit.”

These funds were sitting in the bank “earning next to nothing,” she observed, “but still it was there, in the event we needed to tap into it.”

The budget summary shows while having declined the last four months, the category Days Cash on Hand for meeting the hospital needs (payroll, vendors, etc.) appear to still be robust, at just under 250 days.

In other action, the board heard an update on problems with the  hospital’s boiler system. Incorrectly installed pipes for the outflow are leaking; instead of metal piping, the hospital’s boiler was fitted with PVC-type pipes, which are corroding.

Facilities and Strategic Planning Committee head Tom Eve reported that resulting floor tilt put the boiler unit two degrees out of plumb. Eve said working with facilities experts, long-term planning will examine whether the 13-year-old unit should be replaced, perhaps with two smaller units to have a redundant system.

Steam from the boiler is used for sterilization and humidification in surgery areas. Strategic review is continuing, and CEO Bob Morasko reported repairs will move forward to avoid any potential of “discontinuation of critical services such as surgery.” 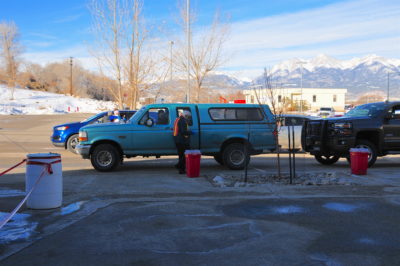 HRRMC medical personnel worked to give out more COVID-19 vaccination shots at the hospital Friday morning. Photo by Dan Smith.

Bob Morasko also reported that groundbreaking for a new Solvista facility on the HRRMC campus is delayed until March or April. The facility has received fewer bids than expected, possibly due to the pandemic impact. New bids will be taken by the end of February.

Morasko complimented the hospital staff for expertly and quickly arranging and undertaking the first COVID vaccination clinic, noting supplies were received on a Wednesday, and the first vaccination was held two day later, with about 430 people vaccinated.

The second vaccination clinic was held Jan. 29, and appeared to run smoothly.  Spokesperson Allison Gergley reported 88 first doses of vaccine were given to people in their vehicles, along with 13 second doses, for a total of 101 doses.

April Asbury, Vice President of Patient Services, presented the updated comprehensive Performance Improvement Plan for 2021. She noted in the detailed document for quality-centered care, there were few changes needed, although a new diagram for the flow of information internally was established. The board approved the updated plan unanimously.

With Product You Purchase

What Is Commingling in Real Estate Investing?